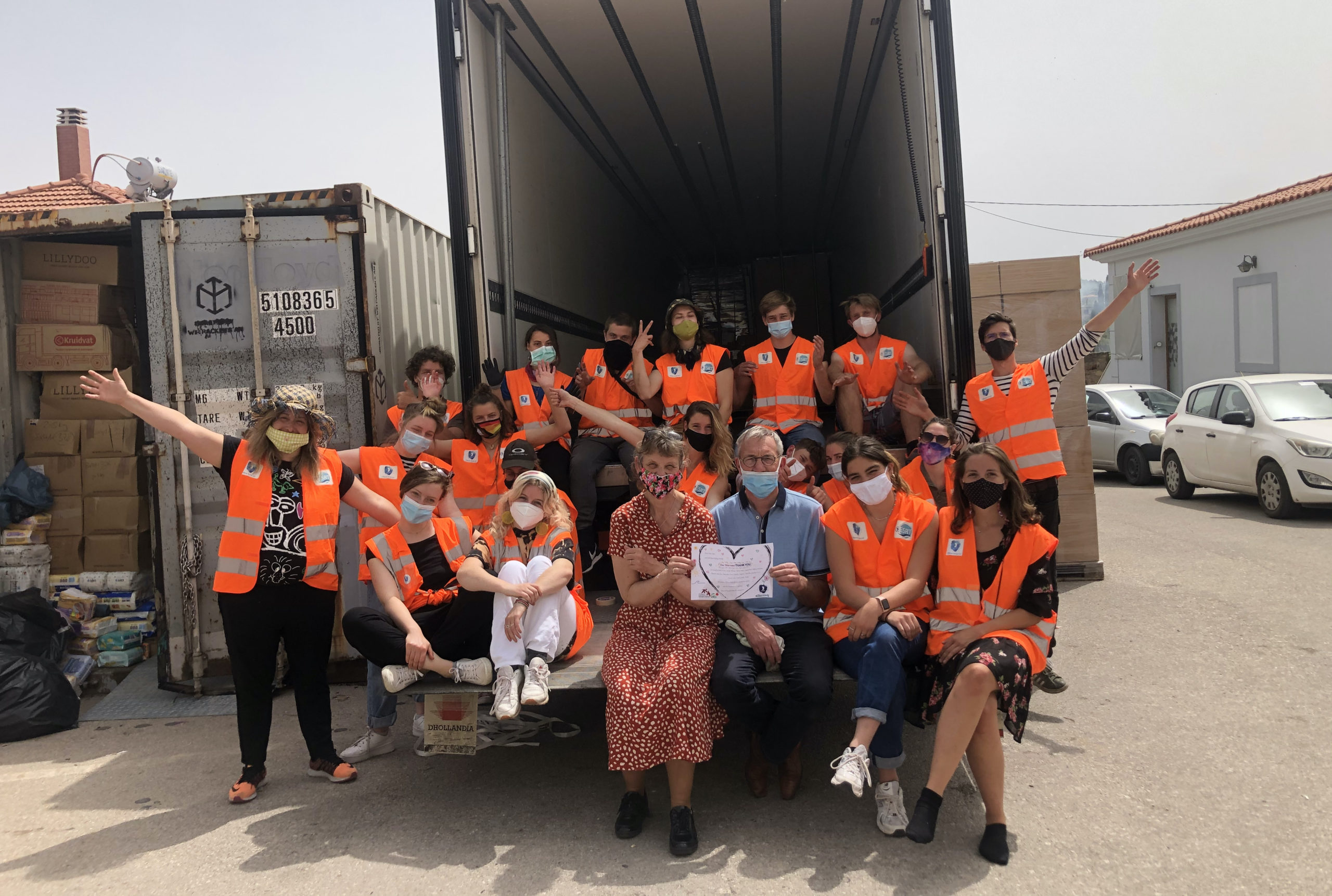 Due to the changing situation in Chios, Offene Arme is now mainly based in the warehouse, where refugees and asylum seekers receive essential non-food items (NFIs) through a free shop system. On-site operations are carried out by a small team of volunteers and coordinators who collect donations and sort and distribute NFIs.

A word from the legal representative, Toula :

The story of CESRT, which became later Offene Arme, started in the autumn of 2015 at Megas Limnionas when Toula Kitromilidi, the owner of a local hotel  called Sun Rooms, heard the cries of children on the nearby beach.

In 2015, refugees who undertook the dangerous journey across the Aegean Sea in a small rubber dinghy were stranded on the beach in front of Toula’s house. She gave them shelter in her hotel, and provided them with clothes, food and water. Later, Toula expressed her worries about the humanitarian emergency on the Greek islands in a Facebook post. When Caspar Thomale and Eleni Boubousis read her post, they contacted Toula to collaborate in helping people seeking refuge in Greece.

Caspar Thomale set up a meeting with the different local groups who set out to provide support to the refugee boats arriving in Chios. At this meeting Toula volunteered to take on the role of a contact person. Soon after, Eleni Boubousis set up a Facebook page to inform people about their work on Chios and attract international volunteers and donors.

After two months Toula decided to establish the Chios Eastern Shore Response Team (CESRT). The team continued to grow, and more volunteers began to arrive as social media channels were set up. From the beginning, important decisions were made by consensus, and the group of volunteers and helpers jointly decided on the operations of CESRT.

Before March 2016, refugees arriving on the Aegean islands were registered here and then sent to Athens, from where they would be distributed across other European Union member states. The number of boats arriving in Greece spiked in the winter of 2015/16, reaching levels never seen before or since. Up to 20 rubber dinghies made the crossing from Turkey to Chios on a daily basis. This suddenly put the onus on the Greek islands of Chios, Lesvos, Samos, Kos and Leros  to deal with the great numbers of arrivals. The surge of people fleeing to Europe required increased efforts by NGOs to support those in need. 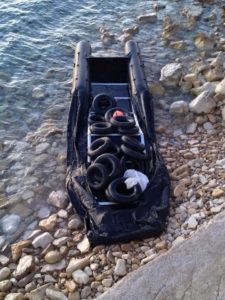 In these days, volunteers worked 4-hour shifts, patrolling the coast and maintaining a lookout for boats. Back then, the registration point, called Tabakika, was located in Chios, where the team distributed milk, clothes, tea and fruits from the local orchards. The basement of Sun Rooms served as a warehouse from which CESRT directly provided supplies to asylum seekers and also equipped other groups of volunteers who later delivered relief supplies to those in need.

Due to political decisions such as the EU-Turkey deal of March 2016, besides others, the movement of people through Greece slowed down and refugees were detained in camps. Refugee camps appeared on the aforementioned islands and on the Greek  mainland. People are detained for months and even years while their asylum claims are processed. In Chios, camps were built at the new Vial registration point, at Dipethe near the central garden in Chios, and Souda near the old castle. With the emergence of the other camps, CESRT began various other programs, including distributions.

Near Souda camp, a ’boutique’ container, where asylum seekers could get free clothes was kept stocked and staffed near Souda camp. Unfortunately, the Souda boutique burned down in a fire, and permission was never granted to replace it.In addition, the team initially took responsibility for food, clothing, and basic education/activities for unaccompanied minors before Save the Children took over this task.

CESRT worked with several other volunteer organisations on the island, including The People’s Street Kitchen and Zaporeak kitchen, both of which provided up to 1,500 meals a day to the Souda camp.

SMH (Salvamento Maritimo Humanitario) also partnered with CESRT, first as a sea rescue team and later as the medical team present at all landings. Liaisons were maintained with all the organisations on the ground, many of whom have come and gone.

Nick Millet, an early CESRT volunteer, founded a school for refugee children (Be Aware and Share, later Action for Education). Another volunteer, Gabrielle Tay, established the Women’s Centre (later Action for Women). Both of these became independent projects.

In the fall of 2016, CESRT volunteers began teaching English in the central garden of Chios. Later this effort became The Language Centre, which for a while was a part of CESRT, before it became an independent organisation, called Engage. Engage is now no longer present on Chios as the need has changed – in particular, people are moving through the island more quickly.

Refugee boats continued to arrive, and cooperation with local authorities resulted in a protocol for landings in which food, water, and clothing were provided by CESRT. In 2019, CESRT became the German based organisation Offene Arme e.V., working alongside SMH and WAHA, an NGO providing medical services to new arrivals on the island. Offene Arme (formerly CESRT), is the only team present at the landings for the entire period except during Covid-19.

Thousands of volunteers have rotated through this team. Many have served ‘on call’ 24/7 to be ready to respond to landings. Their competence on the ground and perseverance as a team earned the respect of local authorities. 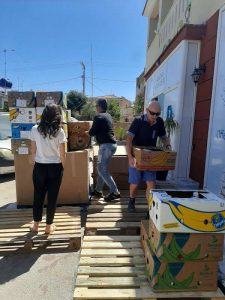 Stocks of clothes, toiletries, and hygiene kits arrive by donation from all over the world. Consequently, the warehouse moved from the basement of Sunrooms to a beach building in Karfas, then to a large hanger-like building near Thymiana, back to Karfas, and eventually to its current home in Thymiana.

Sorting, packing, and re-stocking clothes has been an ongoing mammoth task that every volunteer for Offene Arme has spent hours doing. As a result, we were able to provide many people on the move with a fresh set of clothes and the care of a human face-to-face interaction.

Offene Arme has run hundreds of projects throughout its existence. Our projects have been wide-ranging, from emergency accommodation for especially vulnerable people, to winter-time tea distributions for camp residents. Furthermore, we have organised games and activities for children in Vial; beach cleanings after landings; and a Parents and Toddlers House where children could get a hot shower, a change of clothes, toiletries and a safe, clean place to play. Aid has also been provided to local islanders who are in need. Offene Arme operates a used-clothing free store for locals, and has helped cook meals for local people in need. 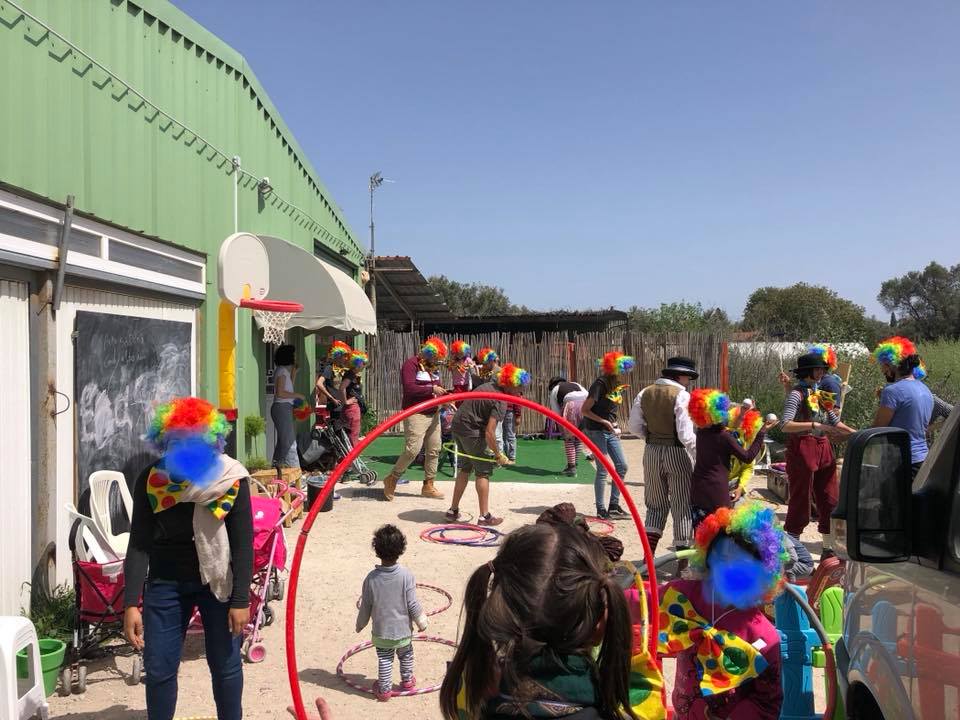 Some of these projects come and go as the needs of the people on the island, the capacity of the team, or the political and economic realities change. Due to the current Covid-19 restrictions, which prevent us from going to landings, our main project is the Distribution Warehouse. This is a ‘free shop’ where people can choose from our stock of clothes and hygiene items. We are the only team on the island that distributes non-food items to people on the move. 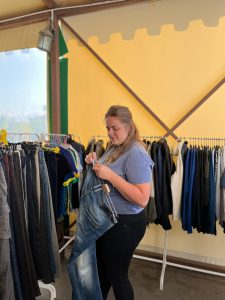 The work of Offene Arme has been made possible through the efforts of short- and long-term self-funded volunteers, dedicated coordinators and the support of organisations from around the world. This support has been invaluable to Offene Arme, as well as ensuring that the situation continues to be in the public eye.

Offene Arme’s efforts were made possible through the numerous voluntary helpers from around the world, approaching each other as equals and engaging in conversations about the priorities of the help provided were and still remain basic principles of the organisation. In fact, there have been over 2,000 volunteers in the team to date. But the number-one volunteer, the only one who doesn’t get to leave the island to go home—as Chios is her home—is Toula, the heart and soul of the team. 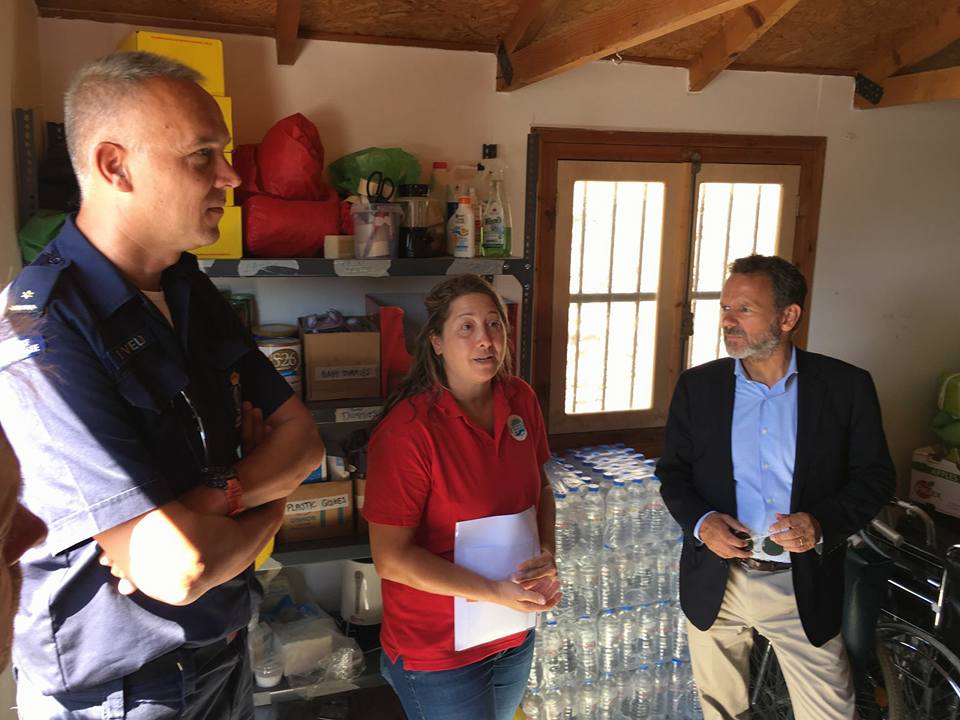