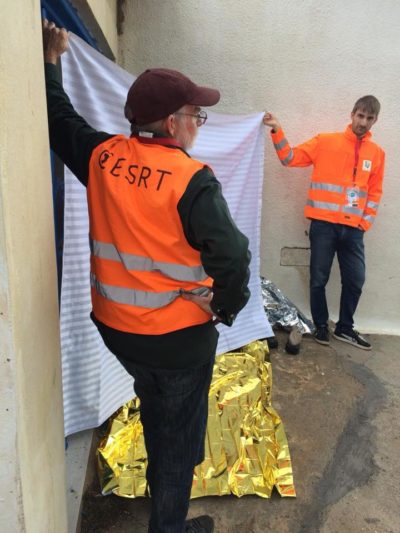 During the past week 3 boats arrived on Chios. One arrived Thursday morning on the beach of Karfas with a total of 39 people in it. They came from Palestine, Syria, Iraq and Egypt. They were all safe and calm. The team handed out food, juice, water and dry clothes to each person.

The second landing took place on Sunday afternoon. 4 men, 1 women and 1 child from Libya and Iraq were transported to the port. They arrived very wet and cold. 2 men were only in their underwear. The team gave straight away emergency blankets and woollen blankets. Everyone was changed into dry and warm clothes.

Sunday night SMH notified the On-Call team at 1:00am about a landing near to Emporios Beach, 30 minutes away from the warehouse. 17 people arrived. The team handed out food and water but hadn’t had time to distribute clothes. The volunteers prepared premade packs for 6 men, 6 women and 5 children on Monday for Vial to pick up and distribute to the new arrivals. The packs included hats, scarves, gloves, jumpers, joggers, thermal tops, socks and underwear.

On Friday a Greek culture class was introduced at the Language Centre. The first class was about Greek Mythology and the students watched a documentary on Zeus. A lot of new students have been registered in the past week. The workshop on Saturday was held on Dream Catchers. The students made the rings from cardboard and decorated them with a combination of string, yarn, beads and feathers. They all created really beautiful, unique dream catchers used to block the negative energy.

In the garden the students have been busy weeding and harvesting. This week Brussel sprouts, Swiss chard, Cabbage, Lettuce and hopefully Carrots and Celery will be planted.

Unfortunately, the weather started getting worse. Due to the rain Vial Games had to be cancelled on one day in the past week. This happened to protect the children from running around in the rain and risk to get a cold. A couple of crafts were done this week with the children. The volunteers handed out white T-Shirts and the kids drew their own designs on them. For Thursday the volunteers prepared a big poster and all the children were drawing on it collectively.

The team were introduced to residents in two different apartment blocks this week. The volunteers met with the residents to discuss their needs and clothes sizes. Every day of the week volunteers prepared packs for everyone. They stayed late on a few occasions to ensure clothes, winter wear, blankets, hygiene packs and baby diapers were given. A great effort from everyone involved.

The Locals Shop was busy on Tuesday as well as on Thursday. A lot of people from the surrounding villages came in and took away many things. One women stayed the whole morning with us, chatting and drinking tea in the sun.

In the warehouse this week everybody was working really hard and long hours. People prepared the restocking for the carstock after the beach landing, as well as there was a lot of packing for apartment distributions going on. On Friday night we received some donations from Lesvos Attica including sanitary pads, 13000 diapers, shower gel and juices for the children. Some volunteers stayed in the warehouse until 23:30 to organize the donations On Monday morning all the diapers 13000 !!!went straight away to Vial as they don’t have any left and depend on CESRT,Offene Arme e.V. to supply them. As we are short on men’s’ clothes the volunteers started to sort women’s coats and jumpers to see which ones can be used for any gender. Additionally, we started to make space for some donations that we will receive in the next 10 days.
Due to heavy rain and wind the conditions for the residents of Vial are serious. Everybody is really concerned, and the team tries to collect some ideas of how to improve it.
Offene Arme e.V. /CESRT

You can support us via